The Return of Serve

The Canto Del Sol Tennis Club in Puerto Vallarta, MX (recommended by David) where I played and practiced on clay for the first time in my life back in 2010.

Tennis is a lot like life. Sometimes you can be on a great run…winning points, games, and sets, and then something happens that can throw you off your game and into a tailspin. It’s not so much the last point but rather the next point that is the most important. Yet as long as you maximize your strengths, focus, and follow-through, then good things tend to happen.

In 2010, I spent most of the year working with my tennis buddy (coworker and friend), David. David’s been playing tennis for probably more years than I’ve been living. He’s traveled the world playing tennis…not professionally but as an avid fan and natural athelete. We’d been working together for a couple of years when one day we decided to meet on the tennis courts after work. That day, I had almost no backhand shot to speak of and so David took it upon himself to become my coach for the year. Once (sometimes twice) a week we hit the courts.

After the first couple of weeks of working on my backhand, I became frustrated. I was thinking too much. Like David, I’ve been athletic all my life…I even played tennis for three years in high school. I even won 3rd place doubles in the conference championships in my last year. Yet, I hadn’t hit a consistent backhand in years and sometimes I doubted if I ever would. But David wouldn’t let up. He wasn’t pushy yet he was consistent and firm. He knew how to reach me and get me out of the slumps.

While working on the backhand, I reflected on a similar life experience. Back in 2008, I spent a month with my dad working on my pilot’s license. In my first five days of flying, we worked on my approaches and landings. On the fifth day, I had reached my limit. I was thinking too much and not feeling the aircraft or the approaches. In my book titled, “The Two Musketeers,” I explained my struggles at length and how I overcame them, by simply understanding myself, my strengths, and following-through with the process. Here a few excerpts from my book that explain that journey.

My book, The Two Musketeers, self-published in June 2009.

“The final phase of flight is all feel and I just wasn’t feeling everything…because I was focused too much on doing one piece of it well. But while focusing on one piece, like speed, I would not focus on maintaining directional control. I’m not sure if my father and I had this conversation on that Monday or Tuesday, but I do remember him making a suggestion to me. He could see the same thing happening. He also knew that I had this tendency to not want to pull the power on the aircraft until I absolutely had to. Recognizing of all this, he suggested that I try flying the aircraft to the ground.”

Now maybe there was something semantic about this, because he and I both knew that I could ‘fly the aircraft’ but landing was becoming a different story. Similar to other simple statements people have given me throughout my life that I’ve never forgotten, these simple words coupled with a day off was all I needed to ‘get it.’ Flying the aircraft to the ground simply meant, don’t feel like you have to execute all the motions of landing until you are ready to let the aircraft touch the earth. This strategy worked well for me, because I was able to stay ahead of the aircraft, keep the power on almost all the way to flare, and then allow myself to setup for a nice touch down. It also allowed me to break up the landing in my mind into steps which forced me to first get the speed down, then my angle of descent, then my directional control, and once I achieved that balance, I only had to respond to correcting the one thing that wasn’t right, rather than feeling like I had to do them all at once.”

“Through my professional career, I began to recognize my own creative process. It generally starts with an idea, dream, or a vision, and as I work towards the outcome, I reach a point where everything I have thought about, learned, and processed becomes really, really muddy. And coupled with my own personal pressure, I become extremely frustrated, compressed, and quiet (it’s like I retract into my own being). But I’d learned over the years to recognize this behavior as it occurred and allow myself the space I need in those times to ‘figure it out.’ And landing was no different.”

“…It had only been 6 days prior when I had almost no confidence that I could land a plane safely on my own. And here it was 6 days later, that I was piloting an aircraft on my own. It’s truly a testament to perseverance, dedication, and personal understanding…But this was also the result of trust and having a good teacher. A teacher that recognized my strengths and played up those strengths to bring out the best in me. To this day, I still can’t believe that I went from no confidence to solo pilot in 6 days and I will always look back on this moment, as a key point in my development, not only as a pilot, but also as a person.”

By the start of the US Open in the late summer of 2010, I had developed a consistent backhand, so much so that I love hitting the shot to this day. While I’ll never be a Roger Federer, I was able to develop a skill and a feel that will last with me for a lifetime. David gave me this gift. He stuck with me and found way to reach me. Like my dad, he offered simple pointers and found out how to connect my strength to my weakness, so much that I forgot about my weakness and focused on my strength. I can still remember the evening at the Stanford West Campus courts when my backhand became so comfortable that I wasn’t even thinking about it. I began to prefer that shot over my forehand. 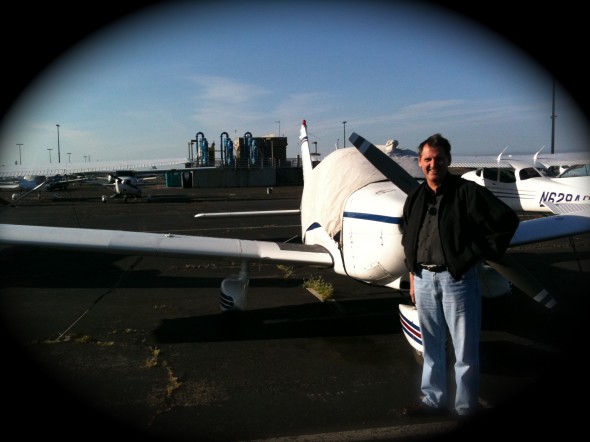 Today, two of my passions merged…tennis and aviation. Today I was able to “return the serve” and offer David with an experience that will hopefully last him a lifetime. Strangely after our quick 0.9 hour Bay Tour flight from PAO over SFO and Alcatraz, and back down south over OAK and the middle of the bay, we approached PAO with a bit of a crosswind (330 at 14kts on runway 31). I wasn’t so much worried about the wind but more so about my feel for the aircraft and making a good landing…like any pilot who wants to make sure he can seal a good flight with a memorable landing. And memorable it was! Most of the flight had been a bit bumpy due to strong winds and unstable air. Yet, as we touched down on runway 31…David echoed words that ever pilot loves to hear…”smooth!”

I was honored, not only for his compliments on the landing, but also for being able to “return the serve.” It’s my gift to him for providing me with such a “smooth” backhand that will last me a lifetime. Thanks, David!