At this point, Kaitlyn had no idea where we were going, but she was ready to go!

Being a pilot truly has its advantages. Yet being a person that loves to travel, loves to plan, and loves to create magical and memorable moments, really makes being a pilot even more advantangeous. Since I’ve received my pilot’s license back in the summer of 2008, I’ve dreamt of having a weekend like I had this past Saturday and Sunday. If you recall from my post last year about a dream getaway to Healdsburg, CA, and my recent "research" trip to Sonoma, I’m always searching for ideas to create a dream getaway weekend. After my fun and succesful "KidNapa" trip back in early August, I began to recognize that I had someone special in my life that would appreciate these types of trips. And after a dinner at my house a couple of weeks ago, I knew the stage was set for the first (of what I hope to be many) getaway weekends. Except, I had to make the first one really special.

Planning weekend getaways as a private pilot can be pretty stressful though. Thankfully, we live in California and the weather is pretty consistent during the dry season (May through September). A couple of weeks ago, Kaitlyn brought dinner and a bottle of wine over to my place. She mentioned that the wine was from one of her favorite vineyards – Bogle Vineyard in Clarksburg, CA (a few miles south of Sacramento). So I immediately stored that in my "mental rolodex." Soon after that night, we found out that our schedules were both open the weekend of Oct 2-3, and so my wheels began turning on creating another surprise getaway trip for her. But this time, unlike the KidNapa trip, we would stay over night so that I could enjoy wine tasting with her.

Planning For Our Getaway
KidNapa, our first flight together, was originally scheduled in my favorite aircraft, N343MM (an Archer III). But when we arrived at the airport that day, the radios were not operating properly so we flew N209J (a Warrior II) instead. This time, I wanted to fly an Archer given that it was a longer flight and I wanted her to experience flying in a newer Archer III. Unfortunately, N343MM was still having issues (this time with the alternator) so I reserved N9294Q, which I’d just flown a week and half ago for my "Day at the Ballpark" flight. I’ve flown N9294Q a few times and I’m really comfortable with the aircraft. Being comfortable in an aircraft is very important to me when I’m flying passengers. I never want to look like I’m uncomfortable or learning the aircraft while flying passengers. 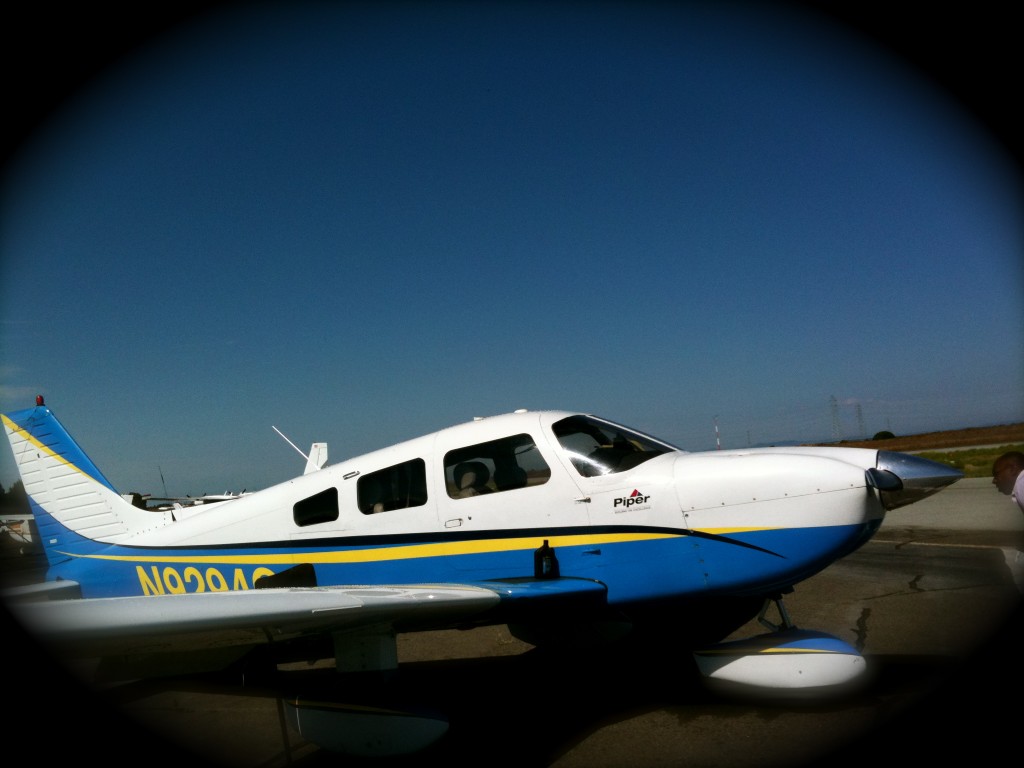 Thankfully the weather held up througout the week and the conditions for our flight were nearly perfect. Given that I’d flown to the Sacramento area numerous times, including a flight into Sacramento Executive Airport (our destination airport) late last year, flight planning was pretty easy. It’s even easier using ForeFlight on my iPhone. The only thing I had left to do before grabbing the keys at the airport was to contact Flight Service and make sure there were no TFRs along the route.

The Flight to SAC 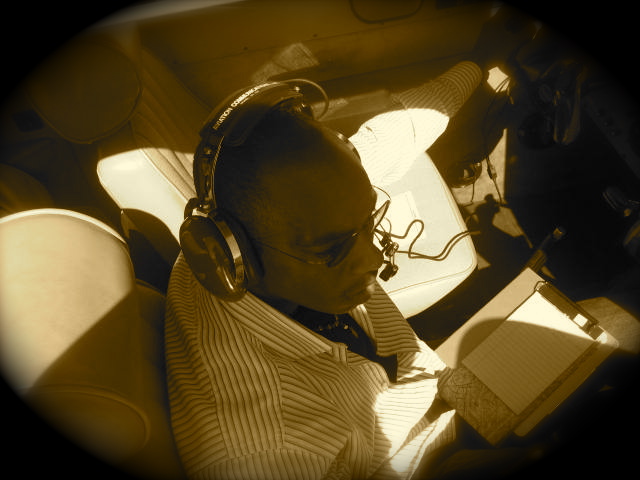 At this poAt this point, I'm growing inpatient with waiting for the fuel truck prior to our departure.

We arrived at the airport at 1pm and this time I received the airport gate code from the front desk. We were taking an overnight trip and had quite a few bags to tote along. So it was much more convenient to park on the ramp next to the aircraft rather than in the airport parking lot and then have to walk nearly 1/2 mile to the aircraft. We would have been ready to leave after my quick (but thorough) preflight but due to a prolonged wait for the fuel truck for a quick fillup, we departed closer to 2pm.

Departing the Bay and heading through the Sunol Pass.

Our flight took us east of the Bay Area through the Sunol Pass and then a slight turn north direct to Sacramento Executive Airport (SAC). NorCal provided us clearance to climb direct up to 5,500 ft as we crossed the Sunol Pass and once we settled at our cruise altitude, we reached a groundspeed of about 140 kts. So in all, the flight up to SAC took only about 30 minutes enroute. Gotta love flying the Archer!

During our brief flight, I took a moment to show Kaitlyn a few things to monitor when we fly. Basically, I showed her the fuel, engine, alternator, and vacuum gauges and instruments. I told her to let me know whenever things weren’t "in the green." I also explained the GPS to her so that she would always know where we were and how fast we were going. I think it helped her feel more aware of what was going on and how she could help out along the way.

Arrival into SAC
On approach into SAC, NorCal advised of an aircraft arriving from my same direction at around my same altitude but I was never able to pick him up. I guess once they realized that there was enough separation, they transfer me over to SAC Tower for arrival. We preceeded downwind for landing on runway 20 behind a Baron and the approach was stable given the calm winds. I did need to add smidge of power during my flare since the aircraft glided down the runway just a tad. My quarterback clock (which has gotten better over the last couple of years) told me to add that little touch of power to smooth out the landing. 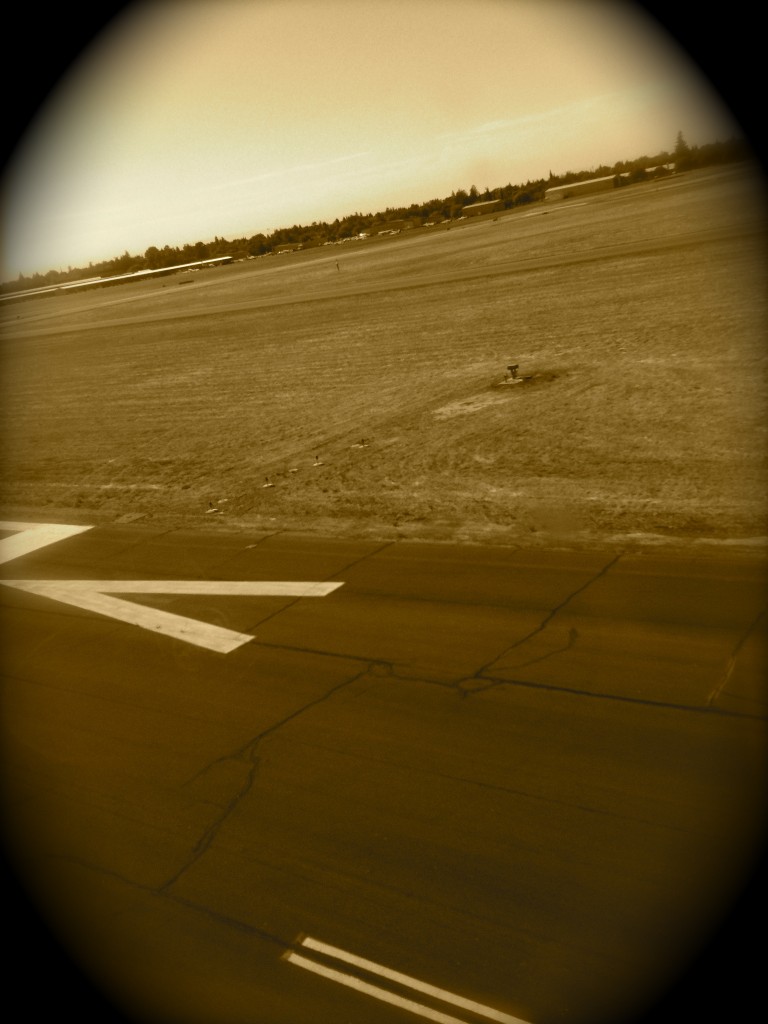 Arrival into SAC on runway 20.

When we arrived at the airport, I chatted with SAC Ground for a bit to get information on transient parking. Given the lesson I learned a couple of weeks ago on my flight to Oakland, I’d called Sacramento Executive Jet Center earlier in the week to see if they charged for overnight parking and they did…$25! So I asked Ground about parking in transient parking instead and they assisted my taxi to the appropriate spot (to the angst of the aircraft behind me waiting to exiting the main taxiway). I’m glad I made that adjustment since regular transient parking was only $6.25/night.

We did, however, head over to Sacramento Executive Jet Center to pick up our rental car from Enterprise. Through my cashback and discounts with Discovercard, I was able to reserve a Jeep Grand Cherokee for the day. After discounts and cash back, the vehicle essentially cost me about $5 for the day. Not bad, eh?!  By this time, it was near 3pm and we were headed to the first of many surprises for Kaitlyn during our 1st Fall Getaway.

The Trip Home
Sunday morning, we headed back to the airport around 10am to drop off the rental car and fly back to Palo Alto. Sunday evening, I was hosting a party at my house in San Jose to offically taste my 2008 Syrah with friends while watching the Chicago Bears Sunday Night Football game. So we needed to get back home in time to rest and prepare for the party. We also needed to return the aircraft by 12:30pm, so I wouldn’t be charged the minimum flight hours for a 24 hr trip…3 hours. This was especially important because my total flight time only ended up being 1.8 hrs. But our flying club has a rule that states that aircraft reserved for more than 24 hrs on the weekends requires a minimum charge of 3 hrs per 24 hrs. I surely didn’t want to pay for hours that I wouldn’t get to log.

The weather in the Bay Area Sunday morning was a bit suspect, yet I decided to head out anyway. At the time of departure, Palo Alto (PAO) was still reporting overcast at 1,400 ft. So I had a couple of back up plans. My first plan was to head out of SAC (which was reporting clear below 12,000 ft) and fly to Livermore (LVK), which was also reporting clear. If we needed to land and hang out until the marine layer dissipated, we could do it at LVK. Or if the couds began to clear, we could descend below Class B near the Sunol Pass (about 3,500 ft) and get below the clouds for a quick skim across the Bay into PAO at pattern altitude of 800ft.

I love departing out of airports not within Class B airspace because I was able to takeoff and climb direct to our cruise altitude of 6,500ft. It was a steady climb in calm air…so calm in fact that Kaitlyn napped for about 45 minutes of the 1 hr flight. The flight took longer given that the tailwind we had on Saturday was now a headwind and our groundspeed was only a brisk 110kts on the way back. Once we neared LVK, I could see that the clouds were clearing in the Bay, even though PAO’s ATIS was still reporting a ceiling (the ATIS hadn’t been updated in almost 100 minutes). So thankfully, we didn’t need to use any our back up plans and we arrived back into PAO right at 12pm.

Flying at 6,500 ft east of Mt. Diablo on a beautiful fall morning.

It was such a smooth, serene, and comfortable flight back…almost the perfect fall flight. Now I’m looking forward to hopefully more smooth flights this fall and more getaways with Kaitlyn in the near future.